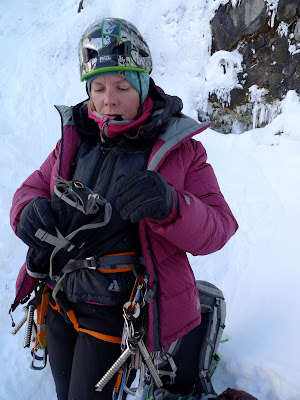 The sight of the wind blowing the cold snow off the trees, I shiver. “It’s still going to be cold today with the windchill factor”, I mutter to Adam. Sitting next to me, Adam is driving our Toyota Tacoma up the well groomed Hyalite Canyon Road. He’s been wearing his harness since he woke up this morning. Since competing in the previous edition of the Invitational IceBreaker (http://www.montanaalpineguides.com/bozemanicefestival/icebreaker.html), Adam has been looking forward to competing again this year.We arrived here a few days ago and tried to make the most out of our time here despite an average of -20F each day. Today, temperatures are meant to be in the teens. Yet with the wind, it may not feel much warmer. At least, we will be moving a lot. As legendary ice climber and organizer of the competition Joe Josephson – aka JoJo – explained during our pre competition meeting the previous night at the Northern Lights (http://www.northernlightstrading.com/), we will have to hit two areas in the lower portion of the canyon and one area in the upper part of the canyon. This means that we will be spend just about as much climbing as hiking, between 7am and 4pm, at which time, all the competitors will have to be back in the main parking lot. 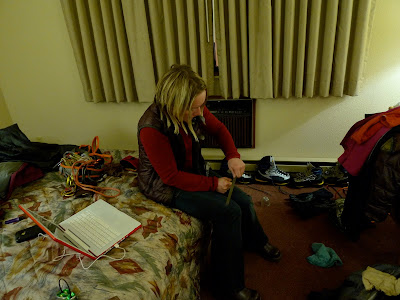 It’s 6.30am when we park the car. Competitors are getting their gear ready and psyching up for the long and exciting day ahead. We start to make out the surrounding summits as dawn is slowly breaking. I greet my partner Adrienne, who is already geared up and ready to go. I met her last night for the first time ever when JoJo randomly paired us up. Although I was hoping to be with my long time friend and last year partner Sarah Hueniken, 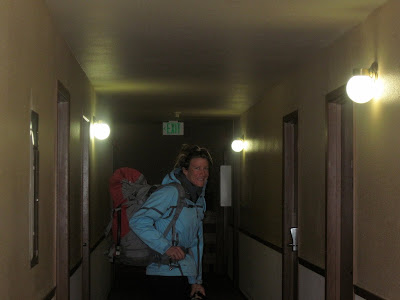 I welcomed the opportunity to climb with someone new. All teams were assigned a starting area and we had spent a half hour strategizing which routes to climb and which areas to hit after the Mummy Cooler Area, where we would be starting. The goal of the competition is to earn the most points, by climbing routes that have the highest score, but that also don’t take up too much time. 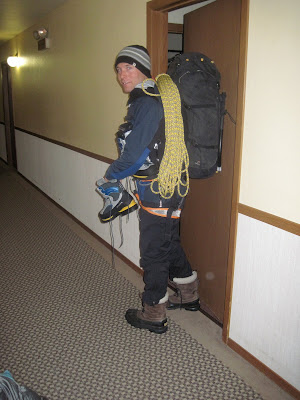 It’s 7am when JoJo give the “Start” call. We all start running on the snowy trail. We warm up on Thin Chance, Fat Chance and a mixed route in between the two – The White Zombie. Then, we hike up to Crypt Orchid before climbing the two routes further right: Cave and Gully and Feeing the Cat. As I lead Cave and Gully, I start getting pummeled with intense spindrifts. I can’t look up or climb up without eating and getting blinded by snow. Simultaneously, I hear a big boom. Is it an avalanche, I wonder? Did it release above me? It’s around 9.30am. Eventually the spindrifts stop and I keep climbing as fast as I can to get back down to the shelter of the cave below, where Adrienne is belaying me. With our focus being on the competition, we push away thoughts of potential avalanche hazard. We are in a pretty sheltered area and being in a competition somehow adds to the feeling of security. As we make our way to the next climb, we step into pretty deep pockets of snow. The angle isn’t steep enough for real avalanche hazard, but I start wondering what it might be higher up. It hasn’t snowed in a few days and the avalanche hazard is rated low. Yet, signs are starting to line up.

We leave the Mummy Cooler Area to hit the upper section of Hyalite Canyon and start up the never ending hike up to the Dribbles Area, home to a few multipitch ice climbs. Since it is the easiest area to access in the upper area of the canyon, I expect to see other competitors hiking up or down from this area, or to spot people on climbs such as Responsible Family Man, Avalanche Gulch, The Dribbles or Silken Falls – the climb we opted to climb. Yet, we see no one. Not a soul in sight. Not a sound either. I notice that the footsteps forming the path are all facing downhill. The sky is darkening and it is starting to snow. It’s around noon. There are no climbers on any of the climbs. Although we feel somewhat lucky, the place is starting to feel eerie. Where is everyone? Still in competition mode, we march on straight to Silken Falls, a 400ft climb on the far right side of the area, that would earn us 2000 points. At the foot of the climb, Adrienne drops her watch and asks me if I can go pick it up. I hike down to the watch, which is sitting 60ft down on the snow. As I turn around to make my way back up to our packs, I notice a Petzl Nomic standing up straight in the snow with an orange helmet covering the head and pick. I lean over and see boots fitting with Dart crampons. “I think there is someone there”, I tell Adrienne. I am about 200ft above the person and start calling out: “Hey, are you OK? Do you help? What’s going on?” But nothing. No answer. “I need to go check on the person”, I inform Adrienne. “Pass me by backpack. maybe I can give them some tea”. I instantly feel foolish for not carrying a first aid kit. I am in denial, thinking that the person must be injured and might have gone into hypothermia, which would explain why he is unresponsive. The body is hidden behind a tree. As I get closer, I see blood staining the cold snow. I still call out. I still expect an answer. I still expect to see motion. I stil expect to see the torso rising. Only when I see the white plastic-like hands do I understand. The person is dead.

I call out to Adrienne to come down. I can’t deal with being alone with the body. I have never come across a dead person in the mountain. It’s a reality we never want to be confronted with. I don’t know who it is as the face is covered with a black veil and I don’t dare to lift it up. I am afraid to find out, I am afraid I’ll never be able to forget. I am shellshocked. I know it’s competitor from the outfit. I think I know who it is, but it can’t be. Legends don’t die. We sit there for a while. 5mins? 30mins? an hours? I don’t know. When we start shivering, we decide to go down. Rescue must be on its way. What shocks me the most right then is how despite death, life goes on. We hike back up, coil the ropes, drink tea and we are on our way, as though nothing had happened. One minute we are competing, the next, we are faced with death, the next we are neither. Each are a part of the same reality, yet feel like totally separate realities.

On our way back to the parking lot, we finally come across people, starting with fellow competitor Will Mayo, who was coming to look for us. He tells us that the body we discovered was that of world renown solo ice climber Guy Lacelle. He tells us what happened: the party above Guy and his partner, Adam Knoff, triggered an avalanche that whipped Guy 600ft down Silken Falls. How could a man who had soloed climbs people only dream to climb, die on such easy terrain, swiped by an avalanche? We later find out that other people that day had triggered avalanches here and there. The snowpack was unexpectedly extremely reactive. Will adds that my husband Adam hasn’t returned yet. Without radio to communicate with each other, we have no way to relay information and find out where people are. I freak out and start hiking faster down the trail. We cross paths with the rescue team, with people competitors who are going back up to give a hand. Eventually, in the distance, I see Adam. I fall into his arms and burst into tears. Tears of relief to see him. Tears of sadness for Guy, for his family and friends.

In a few days, I will be heading down to another ice climbing festival: the Ouray Ice Festival. In memory of Guy, I hope to share my passion with many people and also teach the inherent dangers of ice climbing so that we can all be safer out there. The show must go on. 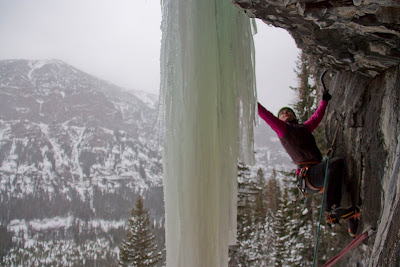