This Fall, I set my eyes on a 12a trad route in Little Cottonwood Canyon: Trinity Right. I had followed it once last year to clean it after Adam had sent it. The route traverses so much that it even goes down a little and I was terrified following it. The potential for pendulums is what scared me.

A year later, I couldn’t remember the fear, I could only remember how striking the line was: an easy unprotectable start leads to an extremely thin underclinging traverse with no feet. The first pieces – a semi equalized small nut and red C3 – sits at the end of the traverse, 15ft above the ground. That first traverse gave me so much trouble. I could not make that tiny tiny undercling crimper work for me, and with no feet, I couldn’t reach the end of the traverse, where the holds got slightly bigger, but still required lots of body tension. After this little 8ft long traverse, the thin right arching crack offers a few good finger locks, before branching two ways. You can stem there for a few moves until you have to commit to the right crack and lay back, fingers in a thin thin crack, and feet on non existing holds, above thin gear. This is a powerful section, which leads to an overhanging but good rest. From there, the crack becomes overhanging and horizontal, heading sharp right. Again, some really thin and powerful undercling moves with bad feet lead to a positive hand jam in a parallel upper crack. Then, the crack angles slightly down, offering a mix of burly underclinging moves and jams with great gear. One last reachy move enables you to clip the fixed carabiners on the anchor. 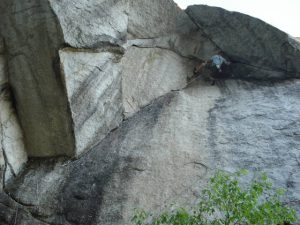 Early November, it was a little cold to go climbing in Little Cottonwood Canyon’s shady Green A Gully. Yet, with a few layers of down jackets on, the climbing was perfect. Granite can be really slippery when it’s a little too warm. On day 1, I had followed Adam’s lead to clean it again. It felt like I would need quite a few days to work the route and figure it out. The following day, Adam led the route first and I then led it clipping the preplaced gear and trying to work out the moves. I just couldn’t figure out the first move on the traverse. Maybe I was scared to “go for it” on such small gear – and the only gear above the ground. Adam was patient. Finally, I realized that if I placed my feet way higher on a far left foothold, I could use that tiny undercling that was giving me so much trouble. Next, I had to figure out the powerful layback, which had seemed so hard at first with the lack of footholds. Yet, seeing Adam climbing it, I saw that you could use the left crack for both feet and fingers. Eventually, after hanging to fiddle with with some gear, I committed to the right crack and made it up to the much welcome rest. The thin undercling holds that followed which had seemed so impossible the day before suddenly felt really solid. I stayed with it and made it to the chains. Now, I had to put all the sections together. We cleaned the route and I got right back on it. And sent on the next try. That same day! I was all the more psyched that I have only climbed a handful of times in LCC and am therefore not very familiar with this style of climbing.

The route that I thought would be my Fall project and would take me many tries came to me way quicker than I ever thought it would. I was really excited and motivated for more. Yet, winter took over the next day, leaving with me many dreams of other routes in my backyard for next year!

PS: am not the one on the pictures!!!