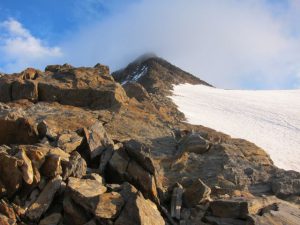 The Weissmies is one of the easternmost 4,000-meter peaks in the Alps and is close to the Swiss/Italian border, in the Saastal, opposite from the famous ski resort, Saas-Fee. Because it doesn’t sit right on the main crest of the Alps, it is more sheltered than the peaks in the neighboring valley of Zermatt and often gets better weather. With this year’s spell of bad weather, it’s been my peak of choice for uncertain weather days.

It’s a bit of a drive to get there from Chamonix. You drive over two passes and then up the Rhone valley, going from the French to German speaking part of Switzerland, and eventually up the narrow and windy road to the Saastal, a V-shaped valley dead-ending at the Mattmark dam.

The hike to the hut the first day was really awesome. In Europe, there are lots of lifts to access areas, even in places where you couldn’t imagine a real use for them. Sometimes the lift is just to access a house, a pasture for cows or sheep, a small village or just for leisure. But I am always grateful for them as they save my body from overuse. We parked the car in SaasAlmagell (all the towns in this valley start with the word “Saas”) and took a small lift up to a tiny hamlet in the mountains. From there, the paths winds through a steep cliff, over manmade bridges, metal steps bolted onto the rock and onward to the Almageller Valley. It is such a contrast from the States, where no manmade structure is allowed in parks or in the mountains. Here, everything is made to be playful, yet it doesn’t seem to really interfere with nature. It’s discreet and not shocking at all.

It takes about three to four hours to hike to the Almageller Hut, with a little break halfway at Almageller Alp—a little restaurant in the middle of nowhere—for a nice, refreshing drink before starting up the steep section the hut. You can only see the hut once you’re 10 minutes away from it. This hut has to be the most beautiful I have ever been to, with a huge terrasse, beautiful stairs, a stream that runs along it, a kitchen that is so polished you can see your reflection in the metal cabinets, beds with nice comforters, all you can eat homemade delicious meals, etc. It’s a real haven and it’s no wonder it’s so popular.

In the morning, we follow red-and-white painted signs on the rocks all the way to a pass before starting up the ridge leading to the summit of the Weissmies. The peak offers a great diversity of rock scrambling and beautiful, thin, snow ridges. I had never done this traverse until this year and almost didn’t get to finish the first time. Pretty high up on the climb, I missed a step and hit my shin hard on the rock. I didn’t want to cry so I just rubbed really hard on my shin to make the pain of what I thought was a bruise go away. When my client asked if I was bleeding, I lifted my pants and realized that not only was it an open wound, I could also see the bone. I breathed hard and with the help of other climbers on the climb, dressed the wound nicely and kept going to the summit, which was only another hour away. I knew that I would be getting stitches within the next few hours. So long as I was moving, I was fine, but when I stopped, the pain came crashing down on me. I was relieved to finally get anesthetics for the stitches and forget about the pain. I wasn’t able to guide for the rest of the week.

A week later though, I was back on that same peak with another client and had a flawless ascent. The descent goes down the north face back to the Hohsaas lift, which in turn takes you back down to the valley floor, giving your knees a few more years to live!

Because of its location, the fun and beautiful approach, the lovely and welcoming hut, the beauty of the ascent and of the peak itself and the lifts taking you down once you’ve descended the north face, the Weissmies is one of my favorite moderate 4,000-meter destinations.