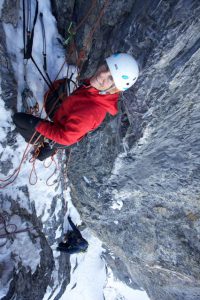 I first climbed the north face in 2003 with friends from Chamonix. The idea had sprung when I crossed ice axes with a friend on a classic Chamonix ice gully and I mentioned that conditions on the Eiger must be stunning. We had just had a spell of 6 weeks of blue bird weather and I knew that the climb had seen lots of traffic. The next day, we were driving there to climb the mighty north face.

In my family, the north face of the Eiger could almost be condsidered an heirloom. My dad had always talked about it and wanted to climb it but deemed that having kids and climbing the Eiger weren’t compatible. I therefore felt that I should climb it before I had kids. I climb so much because I always have this perspective in sight. Although, realistically, I don’t think this would change much for me. But it’s good excuse.

The whole drive there though, I thought that I would say that I was going to bail right once we got to the parking lot, then on the train, then at the hotel at the base of the Eiger (the Eigergletscher Hotel), then at the base of the climb… but suddenly, I have 400m up the face and there was no turning back. I was overwhelmed in some way and the whole climb felt unreal. But it was a landmark in my career as alpinist.

Last Fall, Adam was looking for a partner to climb the north face of the Eiger. I had already done it and had no desire to ever get back on the face. But he really couldn’t find anyone motivated, so I said I would go. At the last minute though, Tim Connelly motivated to go and I then realized that I had really wanted to get back on it, especially with my husband. The whole next day that Adam was on the route, I so regretted not sharing that experience with him. View his video here. So I went and climb the north face of the Drus instead, one of the most beautiful alpine route I have never done.

Yet, the Eiger loomed in the back my mind. I suddenly had the desire to climb it in a day. I figured I would train all winter for it, but training really isn’t something I ever do. I climb all the time, go ski touring a lot, but I never had the perspective of training for an objective. I don’t really know how to I guess. Plus, I traveled so much this winter that there was never any time for specific training. I thought about the Eiger on and off but it was no longer a big goal of mine. I climbed routes like the Supercouloir, Pinocchio on the Tacul, etc. Yet, a week before going on the climb, I tried to do a route on the north face of the Droites with my friend Tania. It had just snowed and the accumulation at the base worried me. We were sinking in to our waste and making slow progess so we pulled the plug and decided to go ski touring instead. In a day, we toured to the base of the Droites from the Argentiere glacier, skied to the Col d’Argentiere and then to the Col du Tour Noir, making for around 2500m elevation gain. It isn’t that much, but I thought that if I could do that easily, then I was fit enough to climb 1800m on the Eiger. I felt good. With a window of great weather ahead and Adam and I looking for an objective for the week, we decided to give the “Eiger in a day” a go. Upon arriving there, we heard the record had been broken down to 2h30! so there was no longer any excuse for us not to be able to do it in a day. With that in mind, we headed for the north face, with no bivy gear or stoves, committing to being back down by dusk.

The climb went really smoothly, with a perfect track the whole way. The climbing felt a lot easier than the first time I did. I never felt tired or wishing the climb would be over already!!, a feeling I often get on long routes. We both knew the routes and I felt that knowing what was ahead was made it less stressful. What was stressful however was having the helicopter a 100m away from us for most of the day, dropping off the new record holder, Dani Arnold, on sections of the face, just to take footage of him. Definitely ruined the wilderness experience for us.

We topped on on the Mitteleggi in the afternoon. And then came the crux: the knifeedge ridge that leads to the top. Quite unnerving. We hung out on the summit for a quite a while, enjoying the fact that we had just shared one of the best climbs of our lives together. Eventually, we descended the west face back to the Eigergletscher, where comfortable Swiss beds awaited us.

View the gallery on my facebook page by clicking here.